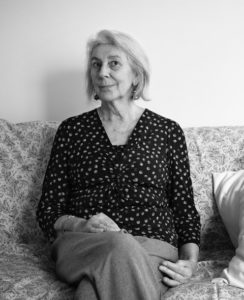 Dr Christine Lucia is Extraordinary Professor in the Faculty of Humanities and Social Sciences at Stellenbosch University, a non-salaried post she held from 2009 to 2014 while based in the Music Department and now holds at the Africa Open Institute. Before she retired in 2007, Lucia was Professor and Head of Music Departments at Wits, Rhodes, and Durban-Westville universities. She was Overseas Visiting Scholar at Cambridge University 2001-2002 and resident scholar at the Bellagio Rockefeller Center in 2009. Her research has been funded by the Bellagio Rockefeller Foundation, the National Arts Council, the Southern African Music Rights Organization, Stellenbosch University, and (now) the Andrew Mellon Foundation.

In the first half of her career Lucia was a concert pianist and teacher, and in the second half, a teacher, researcher, editor, and supervisor. She has published many articles and book chapters on South African music, and two books: The World of South Africa Music: A Reader(2005) and Music Notation: A South African Guide(2011). Her former students include Grant Olwage, Zoliswa Twani, Thembela Vokwana, Chats Devroop, Lindelwa Dalamba, and Thomas Pooley, all of whom are now making a major contribution to music studies in South Africa.

After her retirement, Lucia focussed on research into composers Kevin Volans, Surendran Reddy, and J.P. Mohapeloa. Her work on Volans includes the first entry on a South African composer in the German Lexicon of contemporary composers, Komponisten Der Gegenwart (2013). Her online, digital Joshua Pulumo Mohapeloa Critical Edition in Six Volumes (revised 2016) is the forerunner of the Moerane Critical Edition project. The edition, which won an NIHSS award in 2018 for best digital community project, occupies more than 3000 pages online: 2500 pages of score and 500 pages of commentary. Lucia also produced a CD, African Choral Legacy: Historic Recordings of Joshua Pulumo Mohapeloa (2013) to accompany it. This selection of 31 tracks is mostly sung by choirs recorded by the SABC from the early 1960s onwards, and reveals the enormous changes of style in singing and interpretation that African choral practice has undergone in the past 70 years.

The ‘historically informed’ approach Lucia takes also drives her Moerane work. At present, she not only oversees her six co-workers but is collecting material for her own biography of Moerane, which will be the first major study of a black South African composer.

Lucia set up a website for the publication of Mohapeloa’s music, www.african-composers-edition.co.za, in 2013. This website, which is regularly visited by people looking for information about African composers and choral composition, houses the new Michael Mosoeu Moerane Scholarly Edition, the 2016 Mohapeloa Edition, and the (in progress) Surendran Reddy Performing Edition.

Christine Lucia’s research ethos is underpinned by a degree of activism that derives from experience in the Black Sash movement in Durban during the 1980s, and from her experience in managing change in student access at three universities during the 1990s and early 2000s. The way black music students struggled for access to university – and still do – because of their so-called lack of music theory background, and the way the Academy has marginalised them – and still does – drives the ideology that informs her current work. She is interested in all types of music, but is passionate about choral music in southern Africa, and is committed to giving it scholarly status and international recognition, and to making invisible repertoires visible.