Michael Bhatch is a Bulawayo-born, Cape Town based academic and sound artist. He teaches academic and information literacy at the University of the Western Cape, and his doctoral scholarship focuses on Afrofuturism within the context of continental Africa.

His other areas of interest include Sociolinguistics, Black popular music and African Studies.  As an artist he wears the hat of a Crate digger, DJ and Beat maker, who works across genres and other boundaries. His work as an artist is an extension of his scholarly output.

Michael Bhatch speaks about his research focus, for his sonic residency at AOI, as follows: “Using Afrofuturist theory, and Hip Hop culture as a framework, I will engage in socio-archeological practices that seek to archive, analyse, recontextualise and explore forgotten sounds of the past. These historical recovery processes will be executed through critical analysis, crate digging and sampling. Throughout these processes (and in pursuit of chrono-political agency) I will assume the identity of the ‘Data thief’.

My research will culminate in the production of a mixtape and beat tape, mostly sourced from the AOI Hidden Years archives. These outputs will be accompanied by scholarship in the form of a lecture, and practical workshop. I will also present a public performance which will draw on the scholarly and artistic outputs of my residency.”

The new mix that was produced by Michael, as part of his residency, can be heard on this insert.

The soundscape is titled ‘Credo Mutwa’. It was produced on the Sankofa Philosophy 404, and pays homage to Credo Mutwa. The project was inspired by The Data Thief, Astro-Blackness, Indigenous Futurities, Sankofa, Griots, Folklore, Mythology and the secret Black technological interventions that facilitate temporal dislocation, and the transfer of consciousness across temporal boundaries through sound. It draws on ancient African rhythms, and the long tradition of technological experimentation within the Black music tradition, to imagine new sonic possibilities and facilitate chrono-political reasoning. It endeavors to blur the lines between technology and magic, past and future, the fantastic and the ‘real’, synthetic and organic. It conjures up the aural specters and ancestral echoes. 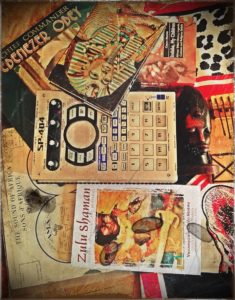 The two playlists from the Hidden Years Archive, one pan-African, and one South African, can be accessed on these URLs:

The premise of this lecture is to discuss how record collectors operate as social archaeologists that discover and uncover sonic texts that tell different stories about the past, present and future, from the fringes of society. This lecture will explore how crate diggers operate as ‘chrono-political’ agents (as defined by Kodwo Eshun) and ‘data thieves’ (as defined by John Akomfrah) via the process of negotiating and understanding history through fragments of cultural artifacts (sound) from below. These sonic fragments, in turn, serve as a sounding board for speculation and shaping of the future through the practice of sampling and interpolation.

My discussion will center on the Hip Hop and House Music communities, which use sonic traces from the past to create sonic fictions, in the form of sampled beats, and thereby reexamine and reconfigure the relationship between the past, present and future. These sonic experiments act as vehicles for the cultivation of retrospective and future oriented political agency by collapsing the perceived boundaries between the past, and the future within the present moment. 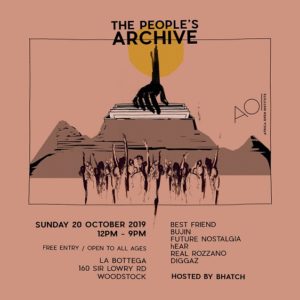 ‘The People’s Archive’ was a public DJ event that was curated by Michael Bhatch and hosted by AOI in October 2019.

The event was a celebratory coming together and exploration of loose networks of DJs and their record collections that feature as living archives that forge community, particularly within the context of counter-culture movements, in Cape Town, and also historically and globally.

The line-up of DJs featured BUJIN (Dani O’Neill), who is first on the video stream, featured also as violinist in her sound art. Thereafter you can hear BEST FRIEND Brandon Newman, who also designed the artwork for the event: Table Mountain with a crate of vinyls opened up.

DIGGAZ’s Kurt Levendal, and then legend REAL ROZZANO (Rozzano Davids) followed. For the latter four hours, DIGGAZ’s Michael Bhatch played, followed by Joey Modiba of hEAR, who alternated half hour slots with FUTURE NOSTALGIA’s Grant Jurius. The last slot of the day was presented by Phillip Blignaut, also of hEAR.

The event took place at La Bottega, in Woodstock, on Sunday 20 October 2019. The event was streamed live by A11 Radio. The video material of the 8-hour event is archived with AOI. 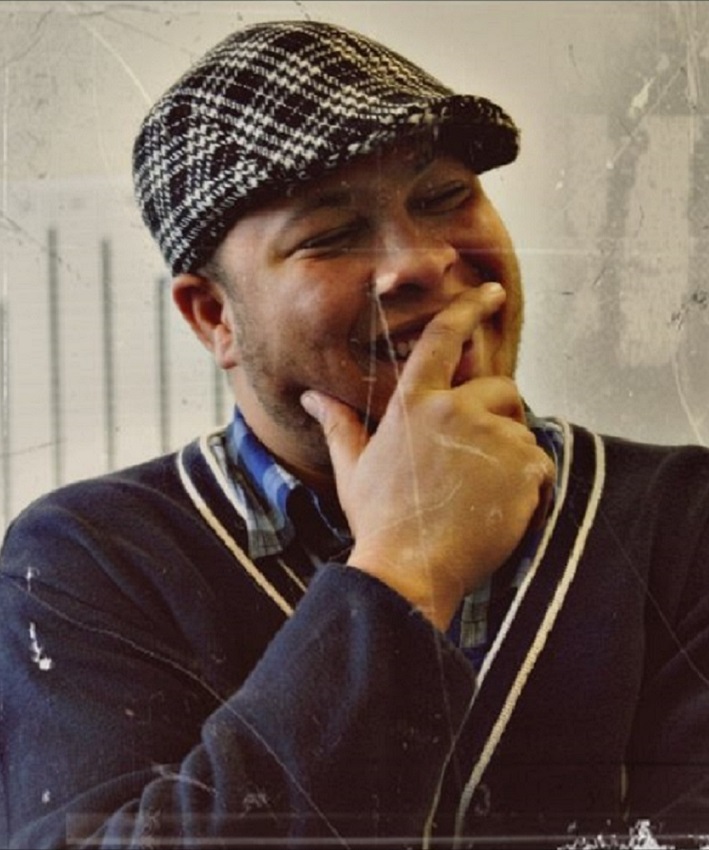