Robert Machiri’s work around the sound, takes its cue from sonic migrations, tracking and rearranging sound experiences through performance. He considers how sound serves as a sociocultural valve for the reading of place and space.

Robert Machiri (b. 1978) is a Zimbabwean multidisciplinary artist based in Johannesburg. Machiri’s work exists at the juncture of two streams of practice; his curatorial concepts and a multi-disciplinary production of artworks.

His works draw on de-colonial discourses that are presented through embodied critique, learning and unlearning, interweaving sound, music and image making. His most notable project PUNGWE is an inter-disciplinary project circling African soundings with related contemporary arts discourses and spaces.

Pungwe has produced collaborative works PUNGWE NIGHTS, Listening to a listening at Pungwe and Sugar free///Pungwe. His current work is presented through a dialectic between object and subject, with inter-medial experiences of sound and image. Beginning by marking movements and critical moments in how sonic cultures are trans-positioned in the loci of the Africa south.

Machiri has been researching ‘cartophonies as orality’. Placing mbira at the centre of this project, as the instrument closest to his mother tongue. His view of orality is the relationships between the human voice and ear, which he refers to as the ‘aurality and mechanics’ in the making of instruments and sound machines. Machiri’s explorations of tracking sounds are based on the inter-dynamics of these elements; how one travels and affects spaces through the embodied sonic. This reading informs Machiri’s working trajectory on sonic cartography:

“thinking about the mobility of our bodies as imaginative tools for exploration of  spaces and history, forming temporal sound maps. My sound explorations involve travelling to archives; digging into archives; recording soundscapes; remixing the archives; installation performances; creating future archives.

I coin this process ‘ruptured cartophonies’ – a blending of sound collections,   performance and cartography. ‘Cartophony’ is used as an attempt to speak tohow practices of sound and mapping may feed into one another in a broad arrayof ways (Samuel Thulin, 2016). Historical mbira genealogies tell the story of  sonic migration, the mobility of African people that lived across our region(Martin Scherzinger, 2010)”.

This narrative has inspired Machiri to present futuristic imaginations of African sonic histories – presenting different mbira instrument types and repertoires from various regions, as ‘cartophonies’. However, a lot of historical study material referenced, is held in archives that were formed through colonial programs. Most of this archival content was framed and classified with colonial intentions. Colonial taxonomy not only labels but insists in creating points of alienation.Machiri’s work on sound archives not only aims to de-center the institutional archive as a colonial body, as so called ‘master keepers of cultures and memories’, but importantly aims to create illustrations and postures that broaden general questions around the practice of archiving.

Robert Machiri’s work around the sound, takes its cue from sonic migrations, tracking and rearranging sound experiences through performance. He considers how sound serves as a sociocultural valve for the reading of place and space.

During his residency at Africa Open Institute, Rob Machiri presented a public seminar at Pieter Okkers House, Africa Open Institute, in which he talked about his Pungwe project, and played music from vinyl recordings, in conversation with his views on the artistic work that he engages in. Furthermore, Robert presented a live broadcast, ‘Pungwe Sound Trails with Robert Machiri’, at Chimurenga Factory, Cape Town, on Pan African Space Station on 7 March 2019. The broadcast included music on vynil, as well as sampled and collected sounds, and can be accessed on the url

Currently his collaborative practice is a composite of three major projects: (i) ‘Pungwe Sound Trails’ – searching for connections within history, moments and place through sound mappings; (ii)  ‘Listening to a Listening at Pungwe’ (https://listeningatpungwe.wordpress.com) – a conversation between Memory Biwa and Robert Machiri, which is a listening initiative where Machiri and Biwa reframe archival sound material through performance; and (iii) “Pungwe”, a mobile performative space.

In November 2018, Machiri visited Musikarchiv Afrika, Sammlungen Iwalewa-Haus, University of Bayreuth. His research extended into performance installations with Tumi Mogorosi, in Bayreuth and Berlin, which incorporated vinyl records from the archive. Machiri is working on consolidating outputs from these projects as ‘Pungwe Sound Trails’, and will circulate sound explorations from his AOI residency on the same platform.

In March 2019 a short documentary on Rob Machiri’s research during his residency at Africa Open Institute was filmed and edited by Chris Kets, and produced by Adrian van Wyk. The film is in the Sonic Residencies archives of the institute, and is available for viewing on request. 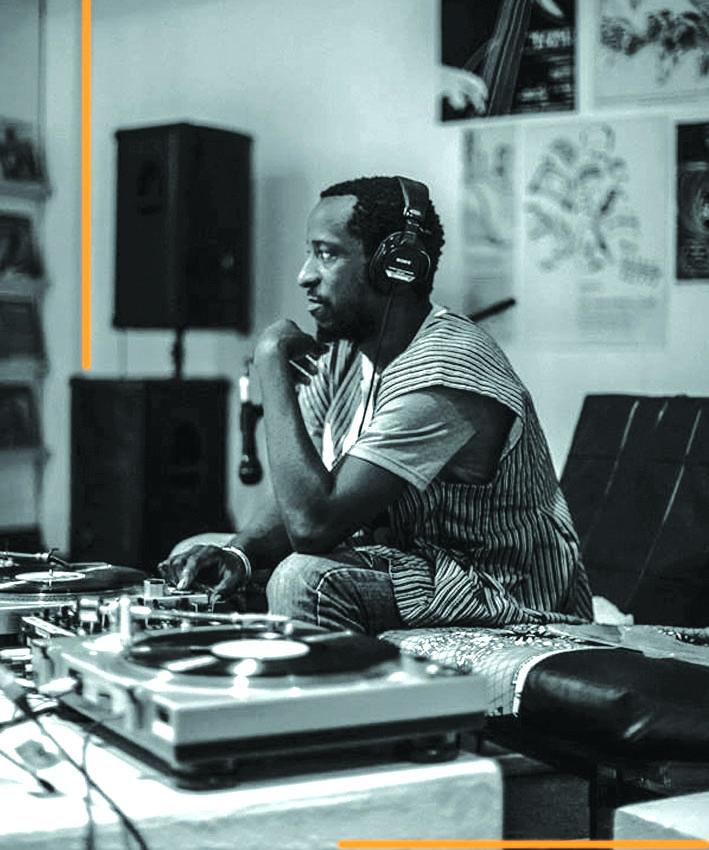